Skip to main content
Return to Top of Page

The Daughter of Man follows its unorthodox heroine as she transforms from maiden to warrior—then to queen, maven, and crone—against the backdrop of suburban America from the 1980s to today. In this bold reframing of the hero’s journey, L. J. Sysko serves up biting social commentary and humorous, unsparing self-critique while enlisting an eccentric cast that includes Betsy Ross as sex worker, Dolly Parton as raptor, and a bemused MILF who exchanges glances with a young man at a gas station. Sysko’s revisions of René Magritte’s modernist icon The Son of Man and the paintings of baroque artist Artemisia Gentileschi, whose extraordinary talent was nearly eclipsed after she took her rapist to trial, loom large in this multifaceted portrait of womanhood. With uncommon force, The Daughter of Man confronts misogyny and violence, even as it bursts with nostalgia, lust, and poignant humor.

L.J. Sysko’s The Daughter of Man is a marvel in so many ways: its chiseled, rambunctious music; its precise and haunting images; its unspooling, rhizomatic similes; its almost voracious but somehow also sort of playful learnedness; its searing critiques of power; in how goddamn funny it can be—I mean, it’s kind of a clinic in irony; in the biting observation (of self and other)—while also, always, tethered to heartbreak and longing and hurt and change. All of which is ultimately to say: what a beautiful book.

There’s a certain slant of Brain to the effervescent, scintillating poems of L.J. Sysko, a deep glee and playful seriousness that make this work among the most Original being written. Musically audacious, these poems rove through the lives of the poet, rethinking womanhood in One Day at a Time as adeptly as in Greek myth. With the verve of Alice Fulton and the panache of Gerald Stern, Sysko keens into the canon, a welcome voice. Sing, indeed, heavenly muse.

Alan Michael Parker, author of The Age of Discovery

With electric nerve, L.J. Sysko’s savvy and often comic poems careen through American pop culture and the suburban world that infantilizes and traps women. Sysko fixes her gaze on adolescent girls and their trajectory into selfhood—a path that takes them through sexual shame and erasure, and then, as they age, into defiance. Is it too much to also ask for wisdom? Not for this poet. She wields her sharpened pen and dexterous music, swinging from irony to grief to knowledge. This is the voice of a fully embodied poet.

Subversive, flinty, tightly wound, these poems spring open to throttle shame. Sysko takes iconic references and tag lines from common culture, exposes them to her wily intelligence, and gives us all something new to shout about. Her characters spin through time, never needing to be saved—they’re excellent swimmers in the ocean of language at every age. This is a marvelous adventure of a book.

Lee Upton, author of The Day Every Day Is

Well, hello there, Ms. L.J. Sysko! You are a wildness and a weirdness, and I would like to play a role in unleashing you upon the world. Your book, The Daughter of Man, is gleeful and quicksilver, not willing to sit still for categorization. I’m here for it … L.J. is the risk-taker, the unveiler, the irreverent namer of things. The Daughter of Man is gleefully unapologetic, upending the familiar and blasting it with motion, heat, and consequence. It’s a wide-eyed stroll through the real world, reintroducing me to moments I just might remember living—moments made new with liberal dashes of L.J.’s humor and singular insight. 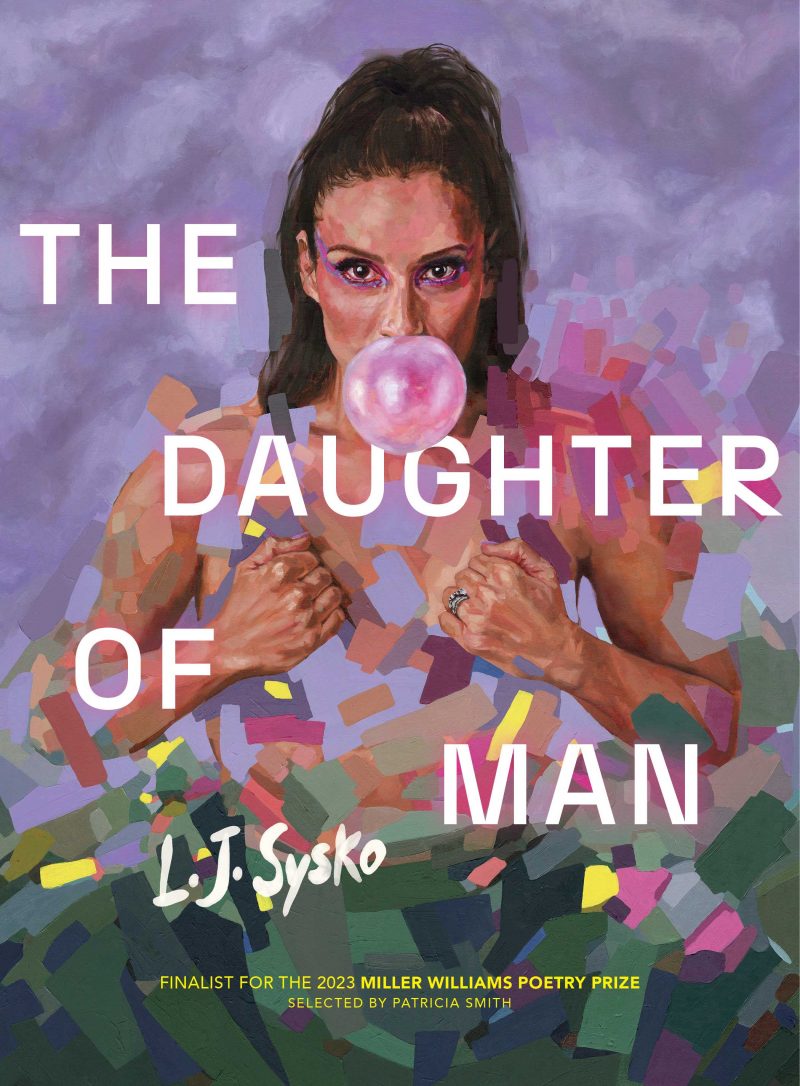